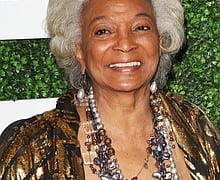 Nichelle Nichols suffered a mild stroke earlier this month, according to her official Facebook page. But the 82-year-old actress, best known for her portrayal of communications officer Lt. Nyota Uhura on the ’60s TV series, “Star Trek,” is on the mend.

“I’m feeling the best I’ve felt in a very long time,” she said during an “Entertainment Tonight” interview about her recovery. “I have this thing about so-called sickness. I’ve always felt, from a little girl, if you deny it, it’ll go away. And it does. I’m as wild and woolly as i’ve ever been. I am a fighter. Don’t be messing with my game.”

African Americans are affected by stroke more than another other racial group in the United States. Women are also at higher risk. Each year, about 55,000 more women than men experience a stroke, with black women most at risk, according to the American Heart Association.

Stroke Can Happen at Any Age

Why Is Colon Cancer Deadlier in Blacks?